Back in August 2009 Poppy was a happy, healthy 3 year old doing the normal things three year olds do, but suddenly over a period of 24hrs she became increasingly unwell until she was eventually rushed to her nearest local hospital. After several terrifying hours of waiting while doctors frantically tried to determine the cause of her illness we were told she was unlikely to survive.....

It was at this point that a specialist recovery team from Sheffield Children's Hospital arrived and managed to stabilise her enough to be transferred to S.C.H and after a nerve-racking ambulance journey we arrived at the hospital and poppy was immediately taken to the intensive care unit.

The next 48 hours were extremely fraught and we came close to losing her on several occasions. It was only at this point that the doctors determined the cause of Poppy’s illness, after many tests, it turned out that Poppy had a severe form of Klebsiella septicaemia, (a bacterial blood infection) and due to the severity of the infection most of her major organs had failed to work or were starting to shut down. Poppy spent the next three weeks in SCH Intensive Care Unit in a drug induced coma with machines taking care of most of her critical bodily functions. With time, treatment and the dedication of the doctors and nurses at I.C.U Poppy started to make good progress with her body starting to recover from the infection.

Suddenly and without much warning Poppy's condition began to deteriorate; she  developed a further complication called ARDS which caused her lungs to become impaired and unable to cope with normal mechanical ventilation. Through a range of treatments, the doctors and nurses at SCH worked tirelessly to help Poppy overcome this devastating blow, but things just kept on going downhill. So it was decided that she needed more specialist treatment and that Poppy should be transferred to another Childrens hospital in Glasgow (that's right Glasgow!!!) for a treatment called E.C.M.O ( a machine that provides respiratory support to the lungs and heart by oxygenating the blood outside the body, giving Poppy's body the time it needed to heal itself). Within hours of the decision to move Poppy, she was flown up to Glasgow by air ambulance; with the doctors accompanying Poppy and hand ventilating her for the whole 6 hour journey.

After a week on the ECMO treatment, it was determined that her lungs had recovered enough to be taken off and flown back to Sheffield. The journey towards recovery started from this point and Poppy was finally removed from all ventilation and woken up from her induced coma. Her recovery was slow but gradual, there were a few notable hiccups along the way but  with the dedication of everyone at the hospital and Poppy's un-shakable happiness she gradually re-learnt how to walk, talk (her first words were 'fish face'!!!), eat food and gain the health she had once had.

In the weeks that followed her recovery was described by the doctors as "miraculous" and our family cannot thank the staff at SCH enough for all they have done to help Poppy survive and recover from this devastating illness. Although nothing will ever repay the amount of care and kindness we received and still receive at SCH, we hope that by raising awareness and much needed funds we can help Sheffield Children's Hospital continue to save and help other children like Poppy.

So if you could help by sponsoring Poppy in her doodle challenge we would be very very grateful. Thank you. 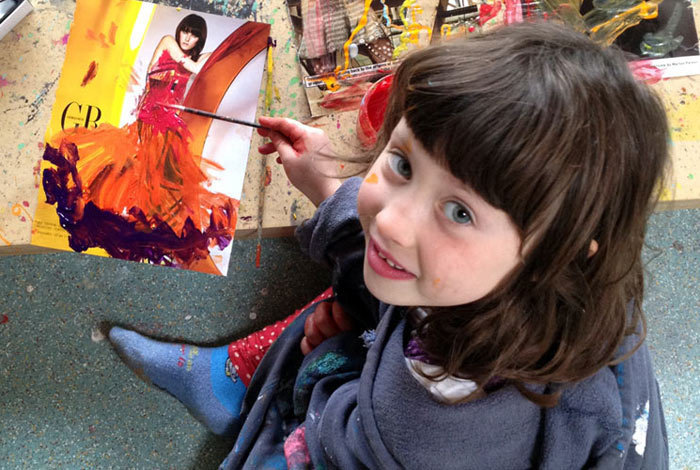 How old are you?

How long does it take to create your work?

Short, Long or really long, maybe 23min for a doodle or maybe 84 days for my big big paintings.

How do you get your ideas for things that you draw?

Well I sometimes sit down with dad and come up with silly stories that I draw. Sometimes I just draw stuff that pops out of my head. I'm not sure where it comes from.... maybe abroad!!!

Out of all the pictures you have on the website which is your favourite?

So far the picture of Emily, Stanley and the monster with purple underwear.... Its from one of my best books and i like the purple bra on the monster

What do you love best about painting, drawing and making things?

Making things that are funny.

Do you have a favourite film/s?

Do you have any favourite books?

All my Mr Men books, The Pencil, The Runaway Dinner, Laura's Star and the gruffalos child.

When your not drawing or painting what do you like doing?

Do you have any favourite artists?

I can't remember.... Maybe myself?

What do you want to be when you grow up?

Do you have any pets?

No, only my Barbies.

What art materials do you use?

Pencils, pens, tins and tubs of paint, pads, paper, scissors, glitter, stickers any thing Mum and Dad give me really.

What are your favourite things in the whole wide world?

My iPod, my family/friends and the park.